Avasopasem manganese (GC4419) is an investigational selective dismutase mimetic drug in development as a radioprotector in combination with radiation therapy (RT), with the goal to reduce side effects from radiation therapy.

Avasopasem was studied in a randomized, double-blinded, placebo-controlled 223-patient trial (GT-201) at 44 North American sites. In the trial, avasopasem met the primary endpoint by demonstrating a 92% reduction in median number of days of SOM in the 90 mg treatment arm as compared to placebo.2 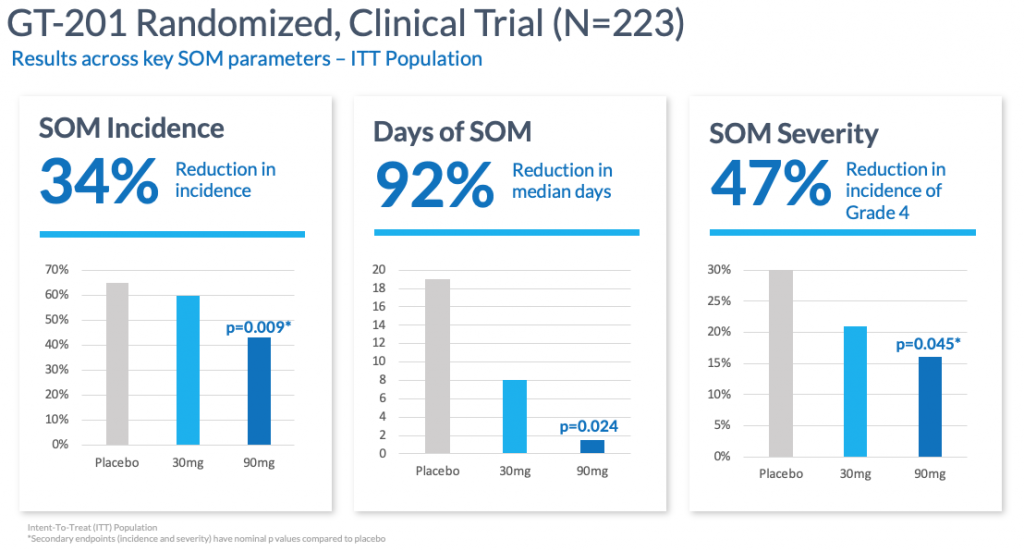 The overall adverse event profile in each of the avasopasem arms was comparable to that in the placebo arm and seemed consistent with the known toxicities of IMRT plus cisplatin when either severe events or events of mild severity grades or grades 3 or greater were considered.  Adverse effects that appeared related to avasopasem were limited to transient, mild-to moderate decreases in blood pressure.2

In this trial, tumor outcomes were maintained at one and two years.3

Galera Therapeutics Reports Statistically Significant Results in a 223-Patient Phase 2b Trial of GC4419 for Severe Oral Mucositis in Patients with Head and Neck Cancer; December 18, 2017

Avasopasem was also studied in a randomized, double-blinded, placebo-controlled 455-patient Phase 3 clinical trial (GTI-4419-301) at 97 North American sites.  In this trial, avasopasem met the primary endpoint by demonstrating a statistically significant reduction in the incidence of SOM (p = 0.045), as well as in the number of days of SOM (p = 0.002).  Avasopasem was generally well tolerated with similar rates of adverse events in the active and placebo arms.

The Company had previously announced topline results from the ROMAN trial on October 19, 2021. Upon further analysis following the October announcement, an error by the contract research organization was identified in the statistical program. Correction of this error resulted in improved p-values for the primary and secondary endpoints.

Investigational Drug – Not for Commercial Distribution