Our small-molecule dismutase mimetics are designed to increase the rapid conversion of superoxide to hydrogen peroxide, which may be key to reducing treatment-related side effects and increasing the anti-cancer efficacy of these treatments.

Learn more about our pipeline, including GC4419, an investigational drug candidate for the reduction of the incidence, duration, and severity of radiation and chemotherapy-induced oral mucositis (OM).

Superoxide, a highly reactive molecule, is produced by every cell as a part of normal metabolism, but left uncontrolled it is highly toxic, leading to cell damage or cell death. To prevent this, the body produces superoxide dismutase enzymes, or SODs, which convert superoxide to hydrogen peroxide. Hydrogen peroxide is much less toxic than superoxide to normal tissue, but more toxic to cancer cells. Radiotherapy induces a large burst of superoxide in the irradiated tissues, which can overwhelm these SODs, damaging normal cells. Such damage to the oral mucosa, located in the mouth, is referred to as oral mucositis, or OM.

Drugs that mimic native SODs could address the inability of SODs to keep up with the superoxide bursts produced by radiotherapy. The challenge has been finding small molecule dismutase mimetics with similarly fast catalytic rates and high selectivity for superoxide that are also stable, and suitable for manufacturing. We have designed, and are developing, our dismutase mimetics to have these essential features.

Oral mucositis occurs when radiotherapy induces the production of superoxide, which attacks and breaks down the epithelial cells lining the mouth. Severe oral mucositis, or SOM, is commonly defined as occurring when patients have ulcers and are unable to swallow solid food, or in the most severe form, oral alimentation (solid or liquid) is not possible.

SOM can lead to devastating complications, including:

It is estimated that approximately 70% of locally advanced HNC patients being treated with the standard of care radiotherapy will develop SOM and between 20% to 30% will develop the most severe type, limiting the patient’s ability to eat or drink.

Radiotherapy causes direct damage to the oral mucosa, at least in part via superoxide generated directly by radiation and by activation of superoxide-producing enzymes shortly thereafter. This damage then activates pathways—which may also involve excessive superoxide—all of which combine to result in mucositis.

As this damage accumulates with successive radiation doses, OM can progress until it becomes severe. If severe OM occurs early enough during the course of radiotherapy, or if it is prolonged or becomes even more severe, aggressive management is required including potentially interrupting or even ending radiotherapy.

Conversion of superoxide to hydrogen peroxide

Our dismutase mimetics are designed to convert the bursts of superoxide induced by radiotherapy to hydrogen peroxide, which is then converted to oxygen and water. In pre-clinical studies, they significantly reduced the immediate and long-term radiation damage to normal tissue in a variety of organs.2,3

Based on these results and the central role of superoxide in the process of OM, we are currently studying our dismutase mimetics in clinical trials to investigate their potential to reduce this elevated superoxide on OM in HNC patients.

In our pre-clinical studies, we have observed increased anti-cancer efficacy of higher daily doses of radiotherapy in combination with our dismutase mimetics. 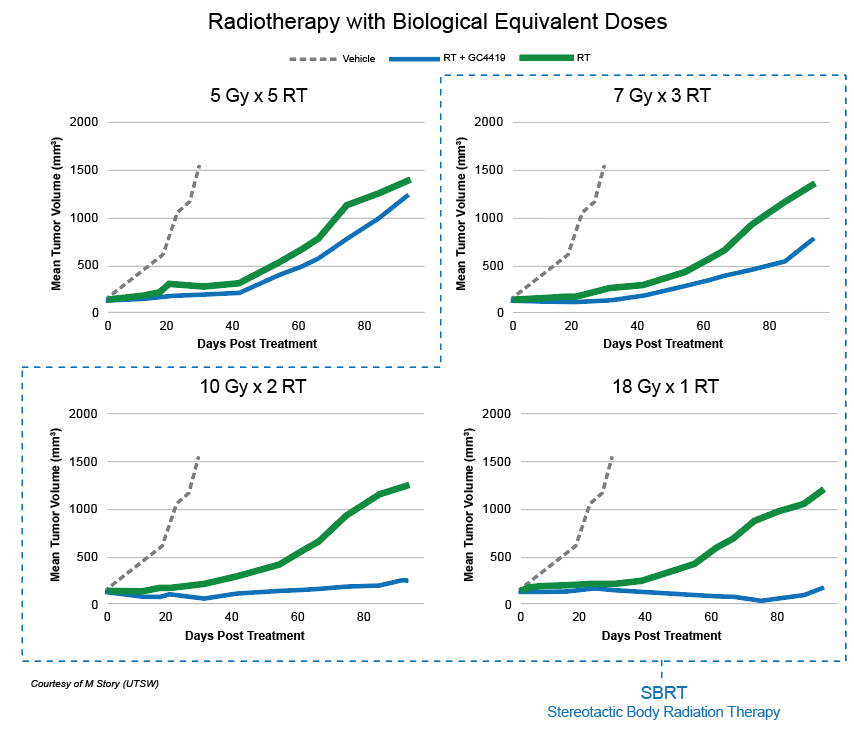 Additional pre-clinical studies have provided further evidence supporting our dismutase mimetics’ biological mechanism in combination with radiotherapy in solid tumors. To test the hypothesis that our dismutase mimetics’ conversion of superoxide to hydrogen peroxide increases the anti-cancer efficacy of radiotherapy, we genetically engineered NSCLC tumors to overexpress catalase enzyme when triggered. This overexpression of catalase, a native enzyme that rapidly removes hydrogen peroxide, blocked the dismutase mimetic’s synergy with radiotherapy in an experiment similar to the ones described above. 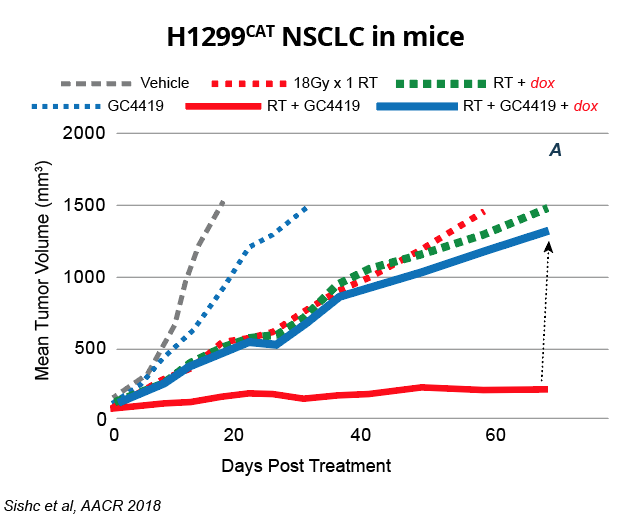 Clinically, stereotactic body radiation therapy (SBRT) is increasingly used in patients with certain tumors, such as those seen in locally advanced pancreatic cancer (LAPC) and non-small cell lung cancer (NSCLC) that are less responsive to the small daily doses typical of IMRT. SBRT typically involves a patient receiving three to five large doses of radiotherapy, in contrast to the 30 to 35 small daily doses typical of IMRT. Even with the use of SBRT, the opportunity for improvement in treatment outcomes is substantial.

To explore this opportunity, we are currently conducting a pilot, randomized, placebo-controlled Phase 1b/2a trial of GC4419 in combination with SBRT in patients with LAPC whose tumor cannot be resected. The primary objective of this trial is to determine the maximum tolerated daily dose of SBRT in conjunction with our dismutase mimetic, with secondary measures assessing progression-free survival, objective response rate and tumor resectability compared to placebo. We believe this combination therapy may lead to improved patient survival rates, which we will also track in our clinical development.

Phase IIb, Randomized, Double-Blind Trial of GC4419 Versus Placebo to Reduce Severe Oral Mucositis Due to Concurrent Radiotherapy and Cisplatin For Head and Neck Cancer